Pius Lacan, Chairman of the Westmoreland PDC, was the recipient of the Governor-General’s over 35 years Award of Excellence for the parish of Westmoreland.

The Governor-General’s Achievement Award continues to be recognised as one of Jamaica’s most successful and prestigious awards programmes. The national criteria were standardised with emphasis on humble origins of the nominees, upward achievement, worthwhile and outstanding service to their communities and other criteria specified on the nomination form

The recent presentation ceremony was held in Black River on August 28, 2014. 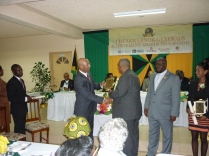 Pius Lacan receiving his award from His Excellency the Most Honourable Sir Patrick Allen.